Sometimes it’s good to develop and then adhere to your own traditions. One of mine is to justify my Gold Card by excursing to the south coast, around the time of the last Bank Holiday Monday. It takes ages, because the trains aren’t very fast and they have weird filigrees in their route, splitting the train once and then again, backing into and out of Eastbourne, so that you go through Hampden Park twice in a single journey etc. Not even mentioning the multiple different ways of reaching the same destination, the angst over whether you’re in the right segment of the train, or whether you’ll end up in Littlehampton by mistake. One cause of my pre-departure pfaffing was trying to optimise the journey to include both Hastings and Bexhill without going back over old ground too often. (Later I discovered that if you make it to all three of the Coastal Culture Trail galleries in one day, you can claim 20% off in the shop. A just reward for those blessed by sinister levels of organisation).

At Clapham Junction a trio of men in suits and a woman in a formal dress boarded, replete with wine and plastic glasses. They seemed to be attending a wedding reception and there was a complicated rehearsal of the various family topics and social taboos, to avoid upsetting Flossie during the meal. She thanked the “guys” for coming along, while the lead male said “he wouldn’t have missed it for the world”. What about the tea in China? I had to move carriages before Eastbourne, so I didn’t hear their conclusions about the Labour leadership election. In the other carriage, a family boarded, to the chagrin of my table neighbour, reading his Andy McNab book (“author of Bravo Two Zero”). When they were alighting, the blithe eagerness of the daughter with her balloon led to a bashing incident with my glasses. In truth, the parental apology might have been more fulsome.

One advantage of these seaside towns is that you can use simplistic navigational heuristics and fail to go badly wrong. I.e. head for the sea/noise of seagulls and go along a bit. Half price entry thanks to my Art Fund pass, which always adds a frisson of parsimony achieved. Not having read much about what was actually on, I was very happily surprised by Rachel Howard’s At Sea. Claims of doing something new with oil paint usually fall short, but in this case Howard has succeeded, I think. When I looked at the paintings and then the blurbs, it was hard to believe they were just “oil and acrylic on canvas”. There were tendrils that could also be craquelure or spider webs, signs of scraping and heaving, wallpaper-like patterns and textures. In the pieces I liked the best there were spare backgrounds in which dashes of faint colours stood out very effectively, alternately evoking the sea horizon, billowing coral or a hilltop of city buildings. One of the invigilators extolled to a visiting couple that there was a video interview with Howard by Will Self, in which she explains some of the techniques she used. I deliberately haven’t watched that yet because I wanted to write down my own impressions. In the accompanying room that she curated, my favourite was Paul Feiler’s Chrome & Lemon.

Upstairs there were a couple of rooms showing Lowry By The Sea. Ancestral loyalty means that I defend Lowry, though I’ve always found him more interesting than his art, very strange person that he was. Reading that he considered his seascapes to be purely an “expression of his loneliness” was revealing, as was his identification of himself with isolated and vulnerable objects, subject to the relentless buffeting of the sea. Two of his renderings of waves were very pleasing, in Stormy Sea, Tanker and Grey Sea. In fact, rather as with Bacon after the recent trip to Norwich, I’ve thought a little less of Lowry after seeing some rather disturbing pictures at The Lowry in Salford. Not an enlightened reaction, I know.

Next door was Quentin Blake’s Life Under Water – A Hastings Celebration, pretty much the obverse of  Lowry’s outlook. It’s hard to maintain any form of self-indulgent melancholy in the face of Blake’s playfulness. Here he ringed his characters with fish and creatures, mouths gaping, and strange probosces dangling in some cases, all washed in marvellous colours (there was a display of his paintbox – one child told his mother that he must have liked that particular blue a lot because it had run out). His characters appeared mostly to reflect a benign view of England in the past, fortified by cheeky irruptions from the present.

Walking back, I noticed that one of the seafront restaurants had a sign on the wall in French and in German, which seemed to be a pragmatic concession, rather than an idealistic attempt at cosmopolitanism. At the station, some device failure was causing a heroic grump-on by a child, stolidly pulling a face on a bench while his mother insisted that “they said it can be fixed if it’s the fan”. “But who broke it in the first place,” he wanted to know.

Just a couple of stops, and no reversing or splitting, to reach Bexhill. I like the way they have very specific instructions about where dogs can be relieved from their leads, referring to the groynes. A word that surely only exists for Geography lessons. The beginnings of a barbecue were visible in the garden of one of the beachfront houses. “The two extremes, side by side”, someone said. Merely seeing the Art Deco De La Warr Pavilion is a joy. While I was too late to see the dancing workshops, there was a banjo-based band attracting polite applause in the amphitheatre like space beneath the gallery. The main exhibition was a consideration of the curve in Bridget Riley’s work. In the past I’ve worried about Riley over-exposure but she’s always burst through that concern. There’s a very specific memory of seeing her Crest at Tate Britain many years ago and feeling rather disturbed by the autokinetic effects. It was included in this show and was still just as powerful, compelling because it’s elusive and the movement can’t be encapsulated. What I don’t recall seeing much of before were the preparatory drawings, including a Matisse-style cutout, in which were very precise instructions – “entire canvas to be shifted by one width” – and the key to her colour coding system (or at least, one of them). Neutral rose and Light Turquoise. What I sometimes worry about with Riley is that the returns have diminished, as the shapes and designs she uses have become more elaborated, but when you see the paintings themselves such qualms seem frivolous. One person described a piece with an unusually light colour scheme to be “uplifting” but I think they’re all optimistic, in a way. Rajasthan, covering an entire wall, was one I hadn’t seen before and very impressive. Two students thought that “the green, the red, the orange and the white” were “so nineties”, while they also asked what the “green did to your eyes”. A retired man exclaimed to anyone in the general area that “they’re a bit peculiar, aren’t they”.

In gallery 2 upstairs there was an exhibition “Towards an alternative history of graphic design Schmuck, POP, bRIAN, Assembling“, which looks at experimental publications loosely associated with the art world, from the 1960s and 70s. I’m afraid that, in spite of my tedious dedication to these things, I did not in fact read all the pages of each publication, printed as they were in rows across the walls, though I did (I think) at least look at all of them. There probably isn’t any way around that, if the artefacts are to be both displayed and preserved (there were some in display boxes). At first they look like fanzines from the 1980s, but I suppose that must be in part because those fanzines were directly or indirectly influenced by such examples as these. I liked some of the arch quotes that stood out:

He’s the kind of a guy who doesn’t pick up the seat when he takes a leak.

Both Fluxus and COUM were involved (the usual suspects), and there was a poem “Smitty”, which (sadly) didn’t refer to Mike Smith. Kurt Schwitters appeared, though I could only recognise his photo and references to Merz, because that text was in German, eheu. Would he have approved of being discussed alongside Dada, I wonder? Another excerpt that stood out was the text of a performance entitled:

Your unhappiness with me is no concern to readers

an advert for which can be seen here. It was quite entertaining to see they way they experimented with typography and layouts, and apparently this was a direct result of the golf ball typewriter. Ed Ruscha, who seems to turn up at almost everything I see at the moment, was represented by his Famous Chocolate Smudge.

Finally, in the rooftop foyer was a small display by Silvio Meier – Drawings, Objects and Paper Cuttings. The intricate drawings, enamelled boxes and eggs were very pleasing, reminding me of the game Machinarium, in part. 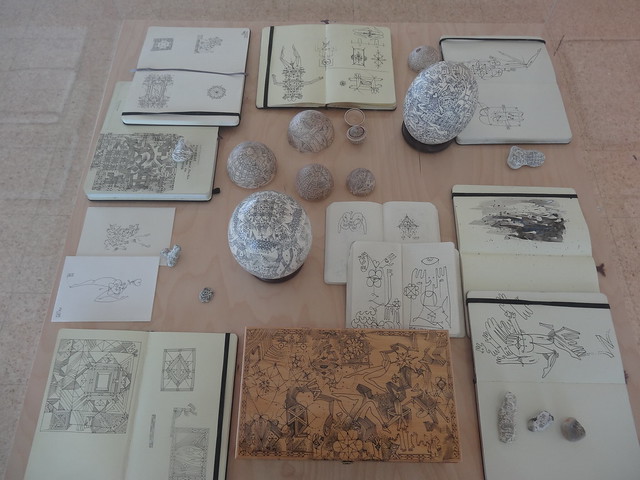 Outside on the sea front, the band was still playing, and there was fraternisation between locals and German schoolkids; the stilted curiosity that comes from polite solicitude.

Those beach houses are lovely, aren’t they Especially the ones with the long gardens

said some friends in the De La Warr shop. Even at the seaside, the same concerns dominate. 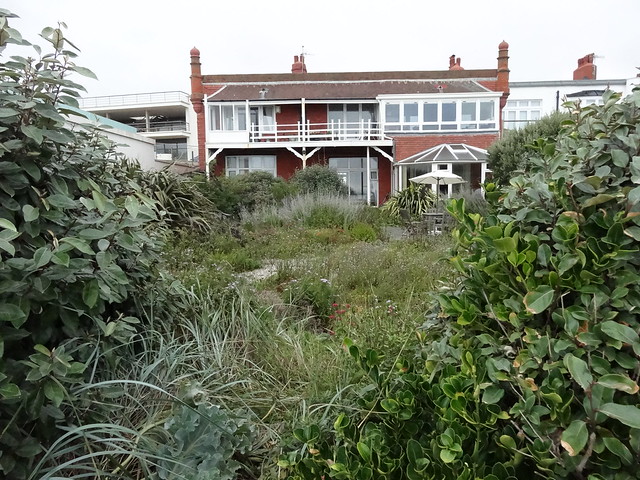 A barbecue in full smokey effect in one of those admired houses was a reminder that people did actually live in them – they weren’t placed purely for the visual entertainment of metropolitan visitors.

After this visit I heard David Hare on Radio Four, lamenting his childhood in Eastbourne and Bexhill, places whose beauties he now savours.