After the usual internal, unoptimised travelling salesman calculations, I went to Finsbury Park first, to catch the last day of Beyond the Interface at the Furtherfield Gallery. On the way there from the station, I walked past a group of dog owners being trained, in dog ownership. Was the trainer using the Barbara Woodhouse approach, or is it verboten even to mention her now? Perhaps they were troublesome dogs.

As with the last time it happened, at the Whitechapel, I was glad to see Heath Bunting’s work. Here there were maps and booklets describing the requirements and entitlements of notional classes of people to various official statuses and documents. We’re all at some point along many flowcharts. In the same room on a stand was an enticing Apple power cable. Printed on the perspex case surrounding the innards from which the cable emerged was a waiver of rights, applicable if you plugged in your device to sup the power. The system grabbed images from your phone if you did connect, uploaded them to a remote server and then projected selections from them. Of course, generally we just agree that these terms and conditions are annoying and move on to what we want.

In the same room was a laptop with a connection to an instance of LambdaMOO. The cave I was in was pretty smoky, so I climbed the ladder to the next space. Staying here too long might not be wise, according to the text, and I moved elsewhere. It made an interesting point about the need to “enter a country in the right way”. It was incredibly tempting to tell Gandalf to go away, as I would have done in The Hobbit. Zach Blas’ “Facial Weaponization Communiqué: Fag Face” was a clever rumination on the prevalence and implications of facial recognition, including a pink mask which didn’t attract the tell-tale algorithmic rectangle in the video footage. Like encrypting your e-mail, this act would naturally attract a lot of attention from the authorities. To be fully effective we would all have to wear the masks. Jennifer Chan’s Grey Matter captured the gaudiness of teenage online interactions and included these comments regarding a distinction that’s sadly eliding away:

On the way to the station there was lots of ominous walling-off and fencing activity, obstructing the way you wanted to go. This all turned out to be in preparation for the Wireless Festival.

At the Estorick Collection there were lots of people taking tiffin on the tables outside, which was unusual. Quite pleased with myself for coming one week before the closure of the Modigliani exhibition, I saw at the entrance that there was to be a tour/talk in an hour and a bit. This didn’t fit in with my original schedule, but seemed appealing. Something to consider while I walked around.

There were a few quotes from Modigliani printed on the walls:

Your real duty is to save your dream. Beauty too has some painful duties; these produce, however, the noblest achievements of the soul.

Life is a gift, from the few to the many. From those who know and who have, to those who do not know and do not have.

An observation I’ve made before and which applied doubly here was that his confidence was shown through the economy of line, capturing his models with only what was essential. As usually happens at this gallery, I went around the two rooms again, to revisit my favourites, before going upstairs to see Shaping the Image by Lino Mannocci. The manipulation of postcard-sized images was a good idea and quite funny in parts. The main effect on me, though, was to remind me of a similar project in the Gerhard Richter show at Marian Goodman last year. Boccioni, one of the artists referred to, was mentioned in passing in the Oliver Hoare catalogue. Hoare said he preferred Severini, primarily because he never allied himself with Futurism.

After Furtherfield, I was conscious of the face detection features of my camera, which were activated by some of the drawings. Even though it clashed with my arrangements for later that day, it would have felt mean-spirited not to attend the talk/tour, especially when I saw the host, Richard Nathanson, trying to attract custom in the garden in the most polite way possible, adding that

“If you drift off before the end of the tour, I won’t be at all offended”.

Most of the pieces in the show were attributed to him, so either he was a millionaire collector or very well connected. After all my self-indulgent deciding process, the talk was marvellous. It’s easy to forget the pleasure of genuine knowledge and appreciation, sincerely conveyed. One of the first points he made was that Modigliani’s corrections become part of intrinsic design. There were no rubbings out in the drawings and he kept at an idea until his expression was completed. The artist’s childhood was unusual, including a strong influence from his grandfather, descended from Spinoza. A critic described him as the most knowledgeable artist he’d ever encountered.

“What I am searching for is neither the real nor the unreal, but the subconscious, the mystery of what is instinctive in the human race”

Nathanson stressed the Gargantuan labours that allowed him to draw with this freedom, addressing my naive reaction about confidence through economy. The Blue Caryatid was:

“Like a single barely audible violin note held at a perfect pitch.”

while another was “like a piece of Chinese calligraphy”. He thought that lots of meditation was required before starting each drawing, and that Modigliani made instinctive additions (such as small designs in the top corners to balance the composition), which ultimately arose from sober reflection. Referring to some of Modigliani’s relationships and encounters, he pointed back at the large photo of the artist by the entrance, and highlighted to us that he’d attempted the same outfit himself, corduroy trousers and a sweater. He was hoping for the same level of success.

Nathanson kept wanting to refer to the relevant pages in the catalogue, and when he had some difficulties someone in the audience shouted out the page number. He came to rely on her assistance and relied to the “very kind lady with the page number”. Even though the drawings betoken a very intimate relationship between the sitter and the artist, Nathanson said that Modigliani “needed distance” and mainly composed his drawings at home, by candlelight. He had to “draw back from the immediate characters to find their angel spirits”, creating a “fusion of primordial quality with the mystery and beauty of human beings”. The most surprising revelation for me was the artist’s interest in Egyptian art, which was indeed very clear in some of the drawings. Apparently he wanted his art to accompany souls into the next world like Egyptian art surrounding the sarcophagus of a king. This explains in part why he didn’t engage with the art world movements of the time (Cubism, Fauvism etc.). He saw himself as part of a timeless tradition, within which these stylistic fads were irrelevant.

Our guide was able to add lots of biographical detail about the artist and the sitters, including one “cat-like lady”, who seduced Jean Cocteau, the latter writing a virulent piece about her afterwards, in revenge. Nathanson thought that obscuring a single small feature on one of the drawings, such as by holding your finger over it, would radically change the balance, indicating how carefully composed they were. One portrait of a “jeune fille” was only included because of an encounter at a dinner party, when he was discussing his preparatory work on the show. As a result, it wasn’t in the catalogue. 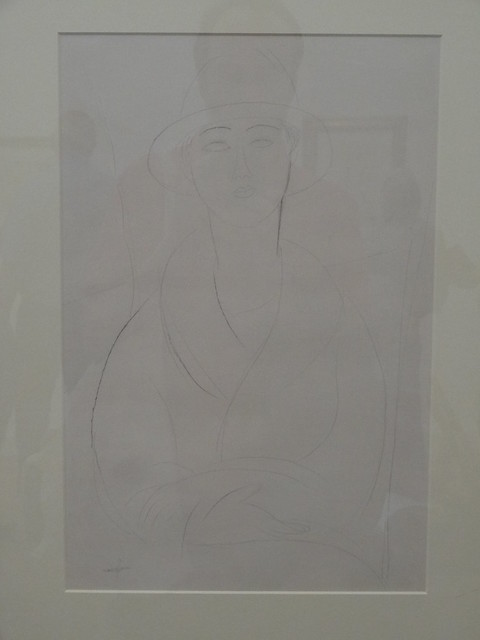 Other memorable comments were that “happiness is an angel with a grave face” and that the markings on one drawing were like those of a “slow burning Catherine wheel”.

A few people were speaking to him afterwards in front of the portrait of Dr François Brabander, which was is part of the permanent collection at the Estorick. The eyes looked on the verge of tears, showing the man’s compassion, while the tension created by the unusually high starched collars reflected the man’s suffering.

It was a very entertaining and enlightening talk, and there was a big queue outside the small Estorick shop afterwards, including me.