Following some excursions and other days, the next event was Tim Key’s Father Slutmas, the second year running that I’d seen his Festivus show. This time it was at the Arts Theatre, the lobby of which grew remarkably crowded while we waited for the auditorium to be prepared. That seems to be the pattern at this venue. Daniel Kitson nonchalantly came up to collect his ticket. In fact, during the show, there was apparently Someone Famous a few rows from the front, to which Key referred, but I didn’t recognise them. The victim in the audience who was invited onto the stage was particularly keen and compliant, if indeed he was genuine. Key still does the best shouting of any comedian. At TCR, a rather drunk person was very pleased with her feeding of the mice on the tracks. On the train itself, some women were lamenting the lack of essence in their phones:

“What kind of bar doesn’t have a charger? 1% battery”.

I think they were trying to record the number of a potential gentleman caller.

A day later I saw Alice Neel at Victoria Miro Mayfair. Not really to my taste, in spite of the feline subjects, though it was interesting to see the changes in her style over the years, the progression towards stronger, thicker lines. Not too far away was the Carroll/Fletcher Project Space, for Uncertain Identities. My favourite piece here was The Conductor’s Fear of the Soloist – Ten Small Pieces for Violin, a video showing downstairs on two screens at a right-angle. The sang-froid of the violinist, keeping alive in the middle of the road while playing his music, was very impressive. Some of the people driving and walking past barely noticed him, untroubled by a mid-tarmac musician, while others stared and recorded. No one, in the sections I saw, engaged with him. On the other screen, the traffic was in a genuine gridlock, worthy of Jacques Tati.

To what we can only call Islington the following day, for the other Victoria Miro gallery. There were some pumpkins by Yayoi Kusama outside, attracting methodical attention by Japanese tourists:

Next to it was James Clar’s installation celebrating 10 years of Parasol Unit:

Back inside, the collage-paintings of Wangechi Mutu were very dense and at first I resisted them. Looking more closely, I liked the way she was using materials, such as a flower composed of insects, pearls, feathers and snake skins (while disapproving, faintly). The video upstairs was very cleverly done, with its reversed movements. One of the reliable pleasures here is the comments book. Someone who taught African Studies realised as a result of seeing Mutu’s work that the course was very male-dominated:

“Seeing these feminine centred evocations of Gikuyu mythology and blackness more generally is just so beautiful and evocative and inspiring. I can’t thank you enough for producing this work.”

Someone else said that the “creature gave me goosebumps”.
That morning while travelling I read an article in an old New Yorker about Eric Fischl’s paintings of attendees at private views and art fairs, and he had a show in the remaining Victoria Miro space. One of the male figures was reminiscent of Alan ‘Botney’ Yentob, but perhaps that was just a coincidence. Fischl’s contempt for his subjects was hilarious, including the superimposition of a skull. Again the comments revealed people’s appreciation.

That evening, an old lady at a bus stop in Kilburn queried my Parasol Unit bag:

The next day began with a trip to the Work Gallery, for After the flash, which explored the imagery of the Atomic Age. It conveyed a sense of the American feeling of power and plenitude in the 1950s, as well as the banality of the secret projects that sought to maintain and extend that power. Also prominent was the remarkable complacency and nonchalance with which they plundered the environment, and the unlikely glamour of atomic weaponry. There was a photo of some Teddy boy types with their molls, lolling about in the desert, attracted perhaps by a bomb test. Apparently a man who had worked at Sellafield came to the show and was talking about the changes at the site compared with the cheery postcard from the 1950s. There’s a good write-up of the show, with lots of photos, including some from the associated book, here. It reminded me that I need to read the Command and Control book that I bought with book tokens in Christmas 2013.

Over to Soho for the inconspicuous Anthony Reynolds gallery and their show What’s In and What’s Not, an interestingly varied group show, then Mayfair for the Timothy Taylor gallery, only to find that it was closed, owing to “construction works”. Tsk. At least that freed some time for Gerhard Richter show at the Marian Goodman gallery, again the last day, which meant it was quite crowded. These were mostly fairly recent works, rather different than the large retrospective I’d seen at Tate Modern a few years ago. At first I was rather wary of the squashed-behind-glass paintings, but I did warm to them when I spotted wrinkles caused by the squashing, and when some of them came to resemble cross-sections of cells, with stretched blobs and holes. There was a member of staff with a trolley on which a laptop was perched, and some tools. He was checking one of the paintings in a way that seemed quite mysterious, and his presence was sufficiently noteworthy that people were taking photos of him rather than the painting itself. Observing my own reactions, it became clear that the mood of the coloured line paintings was altered by the varying prevalence of the collections of stripes – some of the conjunctions sang, while others were mute. 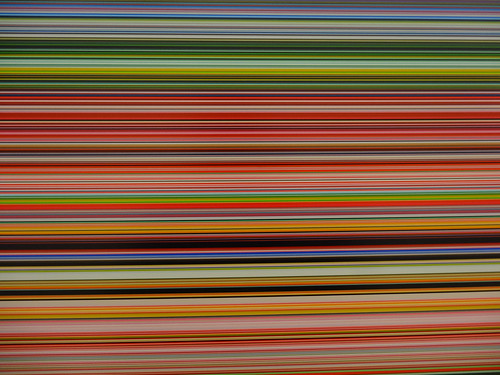 There was another series of rather small landscapes which Richter had defaced/improved with very clever smudges and smears, making people smile as they realised what was happening. 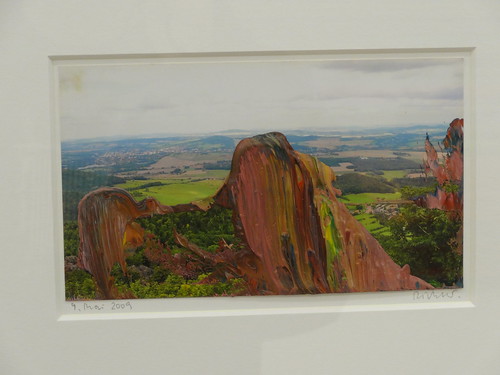 Someone was escorted out of the building while I was there, saying

“How silly, not painting anything”.

Final destination for the day was the BFI, for Another Earth, part of their Sci-Fi season. In contrast to some, I don’t shy away from buses, this time the 139. A pensioner commiserated with the driver, who had to cope with dilatory West End crowds, as well as the sluggish traffic. However, she rescinded her sympathy later when there was some confusion over whether the destination of the bus had changed or not. Eventually the bus did “terminate” early and people alighted forlornly, cursing the driver, who will have been told to do so by his Controllers, with their plans for the Greater Good. The film itself was open to charges of melodrama (not always a bad thing) and predictability, though with an unusually deft and satisfying ending.

There was more to see on Sunday, starting with Nathan Eastwood at the Nunnery Gallery, where I’d enjoyed the East London Group of Artists show in the summer. It also feels more virtuous to support a venue that’s at least vaguely local, instead of the usual trek into the Big Bad Centre. Because it was the last day, the artist himself was there, talking to someone who I think must have been a journalist or another member of the Art World. He said he was particularly interested in “social realism” and that he didn’t like having titles by his works (on the walls of the gallery), because they detracted from the visual effect. All of them had been painted specifically for this show, and he said he’d been inspired by seeing works by George Shaw several years ago. He also didn’t like having blurbs:

Because of this I was free to impose my own explanations, one of the paintings looking to me like the fractured ending of a residents’ meeting for a housing association, if such things still exist.

Onwards, onwards, to the Estorick Collection in Islington, for the final day of Roman Ostia. Free entry with my Art Fund card – opposite of tsk. This was a combination of ancient and modern, with some good abstract sculptures and lovely, sinister mosaics. I hadn’t seen the serrated card technique used by Umberto Mastroianni before, which is always good, though in the end most of the results were rather ugly (not always a bad thing). Amongst the frescoes on display, most of which were damaged, a woman’s eyes stood out, transcending the coarse medium. 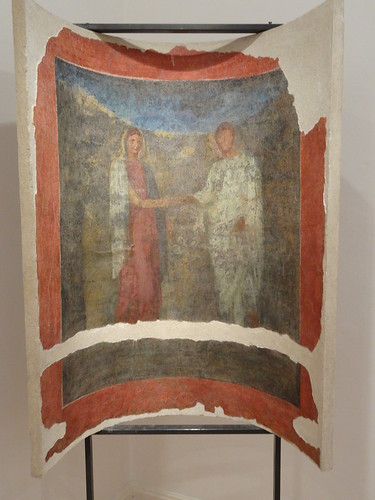 Flickr album of Roman Ostia at the Estorick Collection.

Post-penultimate stop for the day was the ICA. For once I was a little early for my film, so I went into their “poundshop”, where I bought some Christmas-related item that I don’t think I used in the end. The film was Manakamana, which I think I’d made a note of from trailers a few months previously. It’s a wonderful example of that fixed situation genre, in this case a camera within cable cars going up from a village to a temple in Nepal and back again. There’s no voiceover, so you have to work out the relations between the occupants yourself. At first it’s unclear whether people even know each other, or whether they’ve been forced to co-habit for reasons of cable car efficiency. The first duo didn’t say a single word during the whole trip, while one of the following women declared:

“I’m not really a foothills person”.

Quite. In one case, the breathing of a wife was very prominent – I think she was rather anxious, being suspended that high up. Many people referred to the sal forest that they pass en route, one person extolling how good the corn is that’s grown there. The journeys we share with them take on a soothing rhythm, punctuated by sounds in the blackness at the end, as the car turns around inside the station, ready for the next ascent/descent. One group of young band members was particularly garrulous, full of their minutely-defined and ever-changing hierarchies.

“Nature is a flower pot for the cable car”,

said one, while another, who was hosting a very young kitten, said that they should grow out its hair, to match their own. At various points the car passes close to towers around which people cluster, and this group of musicians was jeered by such a group, perhaps because of their identifying haircuts.

A couple of women had ice creams, the results of which were that they fell into giggles, seemingly having forgotten any ice cream techniques they might once have known:

One women travelling on her own had some flowers, and these seemed to be the cause of her beaming smile, emerging after shyness. Not quite so happy were the goats, tricked into a cable car journey, tied together no doubt very quickly so they were awkward and in each others’ way. Their car was rather more spartan, open to the air, and they showed their sincere fear in cycles during the ascent, the bleating possibly stimulated by the fact that the more exposed cars let in the sounds of the mechanism more strongly.

What a beautiful film.